Limu Kossa is a private estate that extends its knowledge to surrounding farmers in order to be able to support them with higher prices and is an astounding example of agro-forestry where coffee grows as close to wild as commercially possible. 100% certified organic.

Since 2017, the start of the partnership with This Side Up they were able to achieve the following:

2017: partnership born, first microlot created for This Side Up, plans to export surrounding farmer lots established for next season.

2018: naturals and washed lots of our Galeh microlot imported. Giday Berhe visited This Side Up on his second ever trip to Europe for the Producer Crossover and to create a thorough outgrower training program.

2019: created an Ethiopian first: a single farmer lot by one of the farm’s trusted outgrowers, Sultan Ba’wari. Imported both Grade 1 and Grade 4 estate lots – the latter serves as one of our prime “base blends”.

Cherries are hand picked by seasonal pickers on the estate. On delivery, all cherries are pre-screened by controllers, after which lots are separated into the washed lots (early and mid season) and naturals (late season).

fully washed: hand-picked, pre-sorted, floated, pulped, wet fermented for 12 hours, soaked and washed, dried on raised beds and dry-milled all under the supervision of the farm owner, Giday. 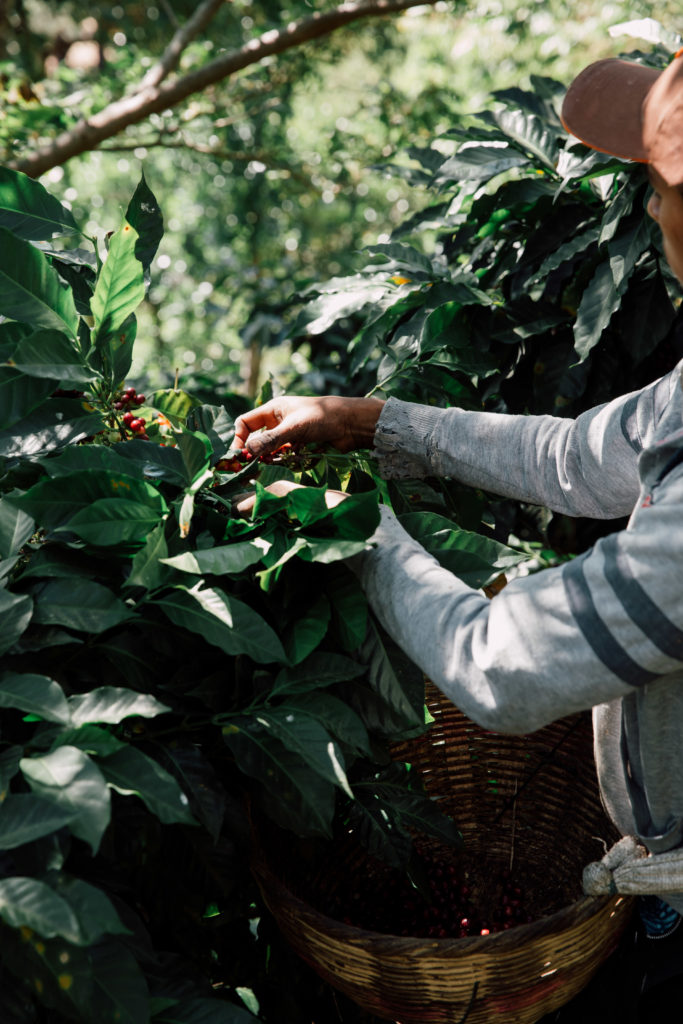 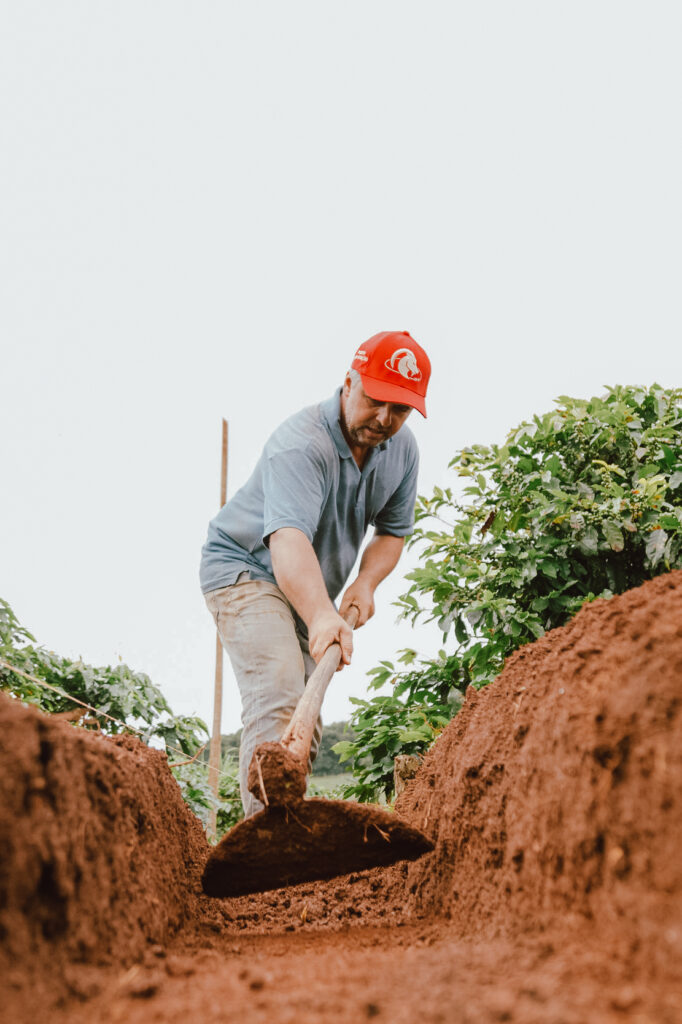 Luiz Saldanha and his partners established Capricornio to breathe new life in five regions in the southern states of Paraná and São Paolo, which until the 1960s, were one of the country’s most vibrant coffee producing regions. Due to terrible frosts and the rise of the major coffee regions up north, its production stagnated, leading many coffee farmers to move north, leaving their farms underdeveloped. Now, due to climate change, these regions have become attractive to farmers again, but hardly anyone saw specialty potential.

That is until Capricornio found 20 passionate farmers and started the Four Seasons project: they helped them turn their farms into modern, ecologically sustainable farms and process their coffees to the highest standards.

Because of its uniquely low latitude (around the tropic of Capricorn at 23ºS), coffee here endures more stress while developing. This leads to large, slowly ripened cherries with surprisingly complex cup profiles, similar to what happens at higher altitudes

Next to single estates and microlots, Capricornio makes  blends from their partner farmers according to roasters’ desired cupping profiles, called “Signatures”. In this they are unrivalled in creating annual cupping consistency.

World class when it comes to processing experimentation and spreading good processing practices: anything from pulped naturals to controlled yeast fermentation – we want our other partners to learn from Capricornio how to perfect it.

Capricornio greatly reduces the ecological footprint of all their 20 partner farmers: they help them create water-efficient mills, implement waste water treatment technologies, and apply systems thinking to optimise all coffee processes and reduce CO2 output. They also stimulate the use of organic fertilisers, energy-efficient machinery and irrigation systems.

Since the start of their collaboration with This Side Up they were able to achieve the following:

2018: Exclusive microlots and boutique lots for This Side Up in the European market. Capricornio collaborated with barista Thiago Sabino to produce the award-winning Honeymoon microlot, and secured him the title for the national Brazilian barista competition. Partnership with IAPAR (Agronomical Institute of Paraná) to lead training programs in its Quality Coffee Centre infrastructure.

2019: experienced a significant increase in demand for signature lots, making Capricornio our biggest supplier. Especially the tailor made blended lots for roasters are a resounding success.

Intango (pronounced “Inango”) is a small washing station on the edge of Lake Kivu. Once part of a cooperative that won the 2014 Rwanda Cup of Excellence, it became run down as the cooperative dissolved. That is until our friend Gilbert Gatali took it over. Grown up in Canada but Rwandan by roots, Gilbert came back to his African roots as a coffee importer. He then continued to help hundreds of farmers improve their quality as manager of Rwanda’s first farmer-owned specialty coffee export company. Finally, after 13 years of managing coffee quality indirectly, he and his best friend Gervais are fulfilling their dreams of running their own specialty coffee washing station.

The washing station works with only 400 supplying farmers, but this gives Gilbert the oversight to make lasting impact for all of them. ‘Intango’ itself is Kinyarwanda for “beginning”: Gilbert’s intention was to create a communal starting point for farmers, staff and community to come together, grow and change their lives positively. Gilbert invests in both quality and environmental sustainability (organic fertilisation and shade trees), with a special role for women in managerial positions.

Rushashi Coffee Washing Station (CWS) is the largest of two washing stations owned by the Abakundakawa coffee producer cooperative, one of This Side Up’s first partners. It is located in the lush and green Gakenke district, characterised by high spiky hills at high altitude – making it ideal for high quality coffee production.  It is no coincidence that this region produces some of Rwanda’s most sought after coffees.

Abakundakawa has come a long way since it started as a smallholder farmer association in 1999. It became a recognised cooperative in 2007. Since then, in a relatively short time, Abakundakawa managed to become an advanced operation with over 2000 member farmers, that serves as a prime example of how coffee growers can turn the specialty market into a seller’s market. We were truly amazed by the standards this coop conforms to: it has the facilities to roast and cup samples on site, employs a full range of organic processing methods (and is on its way to become certified organic), provides full transparency in its bookkeeping and in recent years has received technical and leadership trainings from the Rwandan government and development agencies – especially from SNV, This Side Up’s trusted development partner in Rwanda. In terms of processing, it employs a particularly long fermentation process that has been adopted by several nearby cooperative societies, and has likely contributed to the bronze medal they earned at the 2010 Rwanda Cup of Excellence competition.

Abakundakawa is also a good example of how Rwandan rural society is managing to deal with the horrors of the past in a hopeful and inspiring way. During the genocide, many Rwandan women lost their husbands and were forced to take care of not only their own but many orphaned children. These women started to organise themselves in special women empowerment organisations, but in recent years have also learned that the label “produced by women” has a marketable value, and now sell their coffees separately at a premium. This in turn has sparked a discussion among traditional households (with husbands) about ownership of the coffee trees. In Rwandan smallholder families, the coffee trees are owned by men – but if women receive a premium for their produce, it can benefit all financially to pass some of this ownership to the women in the households. This development is slowly but steadily helping Rwandan women’s emancipation and position in society underway.

Abakundakawa distinguishes itself by supporting two very successful women empowerment organisations: Duhingekawa and Abanyameraka. These organisations represent most of the 740 women out of the coop’s 1961 members and fight for improvement of their position in local society.

Since the start of their parntership in 2013 TSU was able to achieve the following:

2015: creation of the country’s first cascara trials, subject of a value chain exhibition at the Ethnology Museum in Leiden, the Netherlands.

2018: After the success of the experimental natural lots, we created two natural village lots: Rutabo and Minazi. Nursery for shade trees and other organic intercrops created with our premium.

2019: starting agroforestry trials on a microlot close to the Rushashi washing station. Decided to import the natural and washed lot of Rutabo village only.

The Tocto family’s achievement is a national example of how entrepreneurship, respect for local farming traditions, circular thinking and direct roaster relations can completely change rural livelihoods. Since 2011, the coffee farming community in the town Chirinos has done away with the subsistence coffee farming mentality and steadily created a strong, quality focused brand: their innovative processing and independent quality control lab ensure that they can create beautiful coffees that are sought after yearly by the specialty market – up to now mainly in the US.

Churupampa is not just a farm, it’s a social business model which the Tocto family aims to expand, last year to 30 neighbouring farms in their town of Chirinos. Some of the upgrades include better processing facilities, plant renovation schemes with the introduction of new varieties, new drying techniques with plastic covered raised beds to secure stable and uniform drying despite seasonal rainfalls. In 2018, the quality control team cupped around 4,000 samples. Not one lot goes uncupped! Organic and Fair Trade Certified.

Since the start of the partnership with TSU in 2017 they were able to achieve the following:

2017: farmers who produced our two lots installed small drying station (structure + raised beds) on their farm to dry their parchment and extend the drying from 6/7 days on patio to about 25 days of slow drying, which considerably extends the shelf life of the coffee.

2018: Exchanged knowledge of Churupampa’s superbly circular coffee system into the TSU network at the Producer Crossover in Amsterdam in June.

2019: Imported the first 83+ coffee from Churupampa – but retaining a relatively similar premium, an experiment to appeal to roasters on a budget.

Nohemy is Juan Pablo’s aunt, Miriam’s youngest sister. She has one son who lives in Bogota and a daughter who works at the local hospital. She always worked as a school teacher but was recently widowed and had to take over her husband’s coffee farm. The first years, the coffee farm became run down and she was sceptical about the Argote project. However, with the encouragement and advice of her experienced sisters Adiela and Maria, she came to see the value of direct exportation and started to produce high quality coffee. She joined the Argote project in 2019 and her coffee was very well received by roasters and on the cupping table.

Alfredo is the head of the Muñoz Diaz family. He is 77 years old and is the father of Hugo, Freddy and Ibeth. They have a single washing and drying station together and they all do the picking, washing and depulping together. Despite his age, Alfredo often does all the maintenance of the land and the drying and sorting by himself. He provides for his family in other ways too, he is a baker and carpenter – from the Argote premiums, he built drying beds for the family processing station singlehandedly. He has another job recycling beer cans at festivals in town.

Afters 3 years of working side by side I have decided to merge NGOPI with Tane. It makes admin easier and there’s more hands to help getting sustainable coffee in your cup. The shop is gone on this website, but the button on the right and below will lead you towards the new and improved Bamboo Forest Blend. Thanks for the support!